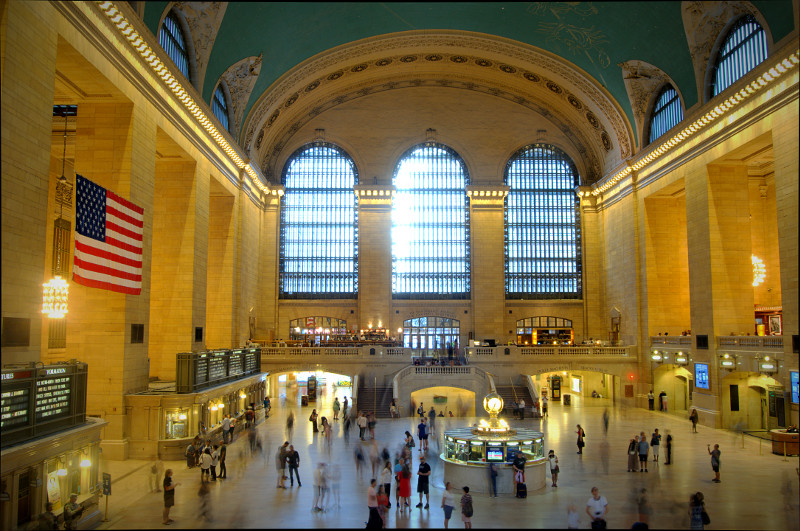 There are lots of iconic sites and architecture throughout New York City.  But, very few have as much appeal like Grand Central Station. After accompanying a friend of mine through a fast paced tour of Manhattan on Father’s Day, we ended our journey with a brief stop at the old station to visit the Apple store. To say the least, it was certainly an eventful evening at Grand Central Station.

If not for the fact that this is a train station and shopping center, stepping into grand central station feels like stepping into a palace or government building. With its alabaster, stone walls and archways and high, painted ceiling, it is more a symbol of opulence than mass transit. Looking up from the lobby of its main entrance, anyone would feel dwarfed by the ceiling which is decorated with the painting of various star constellations of the night sky.

At the center of the concourse is an information booth which provides travelers with details of arrivals, departures and track locations. And, from that vantage point, a visitor is greeted with a portico which surrounds the concourse on level one. The portico is lit with huge, brass chandeliers which are dotted throughout both the the portico and shopping center.

Besides being a main transit point., the station houses various gift shops, electronics stores, and one of the largest restaurant areas that I have come across in a transit area. Unfortunately, I have never had the opportunity to enjoy the food there but, the atmosphere is very cosmopolitan in taste, sights and sounds.

Although, it is not one of the most commonly visited tourist sites in Manhattan, it is one of the most iconic. With its opulent interior and varied shops and stores it is sure to keep any visitor occupied. And, its cosmopolitan restaurant is one which will top anyone’s evening at Grand Central Station.