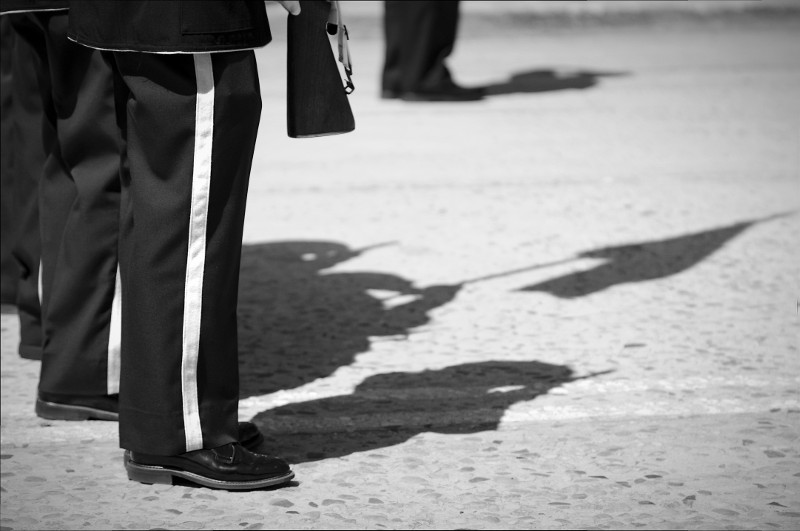 This Memorial Day, I decided to get out on the road and visit a village which I have been anticipating visiting for quite some time – Northport. It was no surprise to come across a parade or similar celebration today. What was surprising to me was that I parked in close proximity of the route of where the parade was expected to pass through – talk about serendipity.  Without any time to waste, I set about taking photos of the moving parade of veterans, soldiers, scouts and others. It was during these shots I started to experiment with something that was ever present because of the sunny day and which I thought would make an equally interesting subject. I started playing with shadows.

It was while playing with shadows I noticed the silhouette of the American flag being hoisted by one of the uniformed soldiers. It was at that point the image in this post really coalesced for me . However, I wanted very much to anchor those shadows and tie them to something physical, or rather what created them. It was that thought which lead me to include the legs of the uniformed soldiers in the shot, thus completing the experience.  Of course, I took many other shots besides this one as I am never satisfied with a singular shot. But it was this photograph which I would say capped the event for me.  In a way, it symbolizes the current soldiers who are standing in the shadows of those who came before them.

In retrospect, I think the shadows communicate more in a photo than do the actual subjects. And, this is reflected in this photo where I was playing with shadows during the Memorial Day activities of Northport, NY. It is the one shot which stands out most for me because it is suggestive that the current soldiers are standing in the shadows of the ones who came before them.