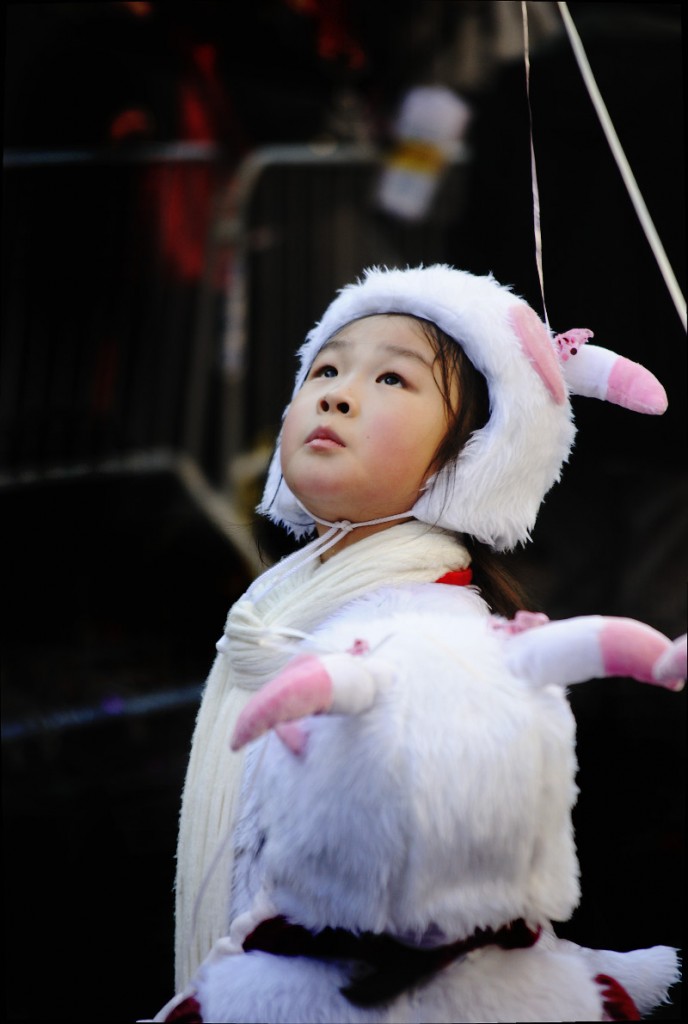 Unlike the Western Zodiac which depicts different celestial groups as representation of periods within a year, the Chinese Zodiac, instead, represents a different animal every year.   There are twelve animals which make up the Chinese Zodiac. And, this year, in February,  the Chinese community of Chinatown, NY came together to celebrate the year of the sheep. True to my nomadic personality, I was present to participate. I worked to capture the thrill and excitement of the crowds  and the performers. However, there was one shot I took which I thought was less about the excitement and more about enjoying the simpler things of the moment — little sheep.

During a brief pause of the parade, one of the celebratory helium balloons escaped into the air and floated upwards into the stratosphere. One of the young girls who was parading the streets, dressed as a little sheep, glanced upwards. At that very moment, I snapped the shot forever capturing that small slice of time which may seem trivial to most given that it was just a balloon; But it meant a lot to this little girl since it captured her attention completely.

For me, what the image represents is not the festival but the little things that we tend to ignore or forget because we get wrapped up in the bigger things. Everyone else was entertaining themselves by shooting confetti, or taking snap shots of the dragon dancers further down the line. But, this little girl was mesmerized by the flight of the balloon and for the three minutes the balloon was in view,  her attention was completely devoted to it.

I think that as adults we get too wrapped up in the bigger things, the explosions, the colour, the light, etc. We fail sometimes to take pleasure in the smaller things. However, thanks to that little sheep, I was reminded of the little, yet simple pleasures that I miss and how much more entertaining they can be.