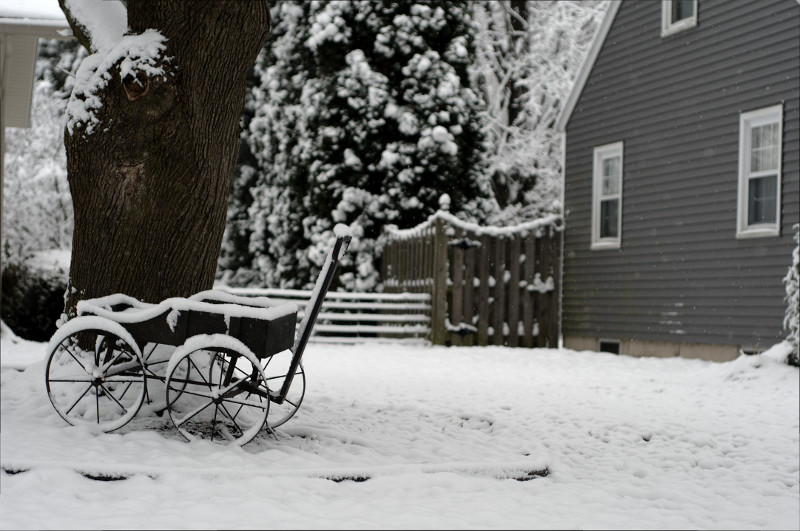 Whereas most around the US enjoyed a beautiful autumn morning to welcome Thanksgiving, Syracuse, true to form had snow more akin to Christmas. Yes, that’s right! Syracuse had a snowy Thanksgiving morning. And, although it only amounted to three to four inches. It was indeed a welcomed and beautiful sight.

Without hesitation, I grabbed my camera and took a quick trip around the block. I could not contain myself as I had not seen that much snow in a while having spent so much time in Long Island. Well, Syracuse did not fail to surprise with the bit of beauty hidden in the snow. There were snow covered wagons, snow covered trees, snow covered paths and snow covered windmills.

All had been crystallized and frozen in their own little way.

The branches of the trees had become covered with snow as if a layer of soap suds had been laid out atop them. No matter how many times I see this phenomenon of snow accumulation on tree branches it never grows old.

The pathways which guide walkers safely between homes in the neighbourhood had a layer too. However, with the paths, they looked more like snow bridges. The sides of the paths formed intricate patterns which criss-cross hinting to the fencing which lay beneath. The paths appear to stretch to infinity in their blanket of white and create this impression of a bridge to nowhere.

The ornaments which sit out on lawns were also lined with their own cake-layer of snow. I captured two here – the little wagon and the windmill. Their caked-on layers of snow each helped them stand out and enhance their appearance but limited their functionality as the moving parts became gummed up with snow and ice.

But,  that is what the Thanksgiving experience is like in Syracuse. It is wet, it is cold, it is a blanket of white. It is a snowy Thanksgiving morning.