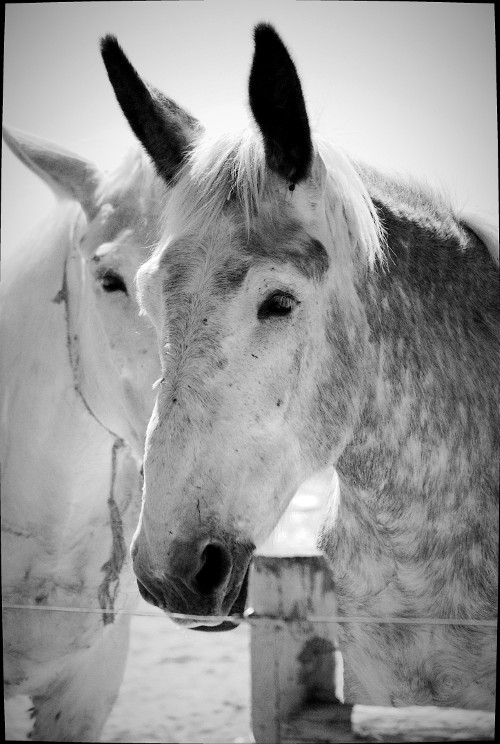 The Sunday following my birthday I took a road trip into Upstate New York’s wine country, the Finger Lakes Region. The sun was out; There was a cool breeze; Everything was blooming. The experience was even much more entertaining as my friends in this adventure, Lynne and Joe, decided to go off road and take the more scenic routes. This placed us square into a lot of America’s farmland.  It was here that I saw the two horses which became the title of this post – A Tale of Two Horses.

The landscape was littered with barns, fields of corn, fields of cows, and stables. It was on passing one of many roadside stables that we paused to observe a solid black stallion. He was very active and was causing a commotion among the other horses. He became even more frantic when I ventured close to the enclosure. Consequently, as much as I wanted to capture him and his unique beauty, I couldn’t.

Instead, I saw two mares which were huddled to one side of the pen. I found them to be more cooperative than the stallion but it was clear they were agitated by his movements. I liked the fact that they were huddled together and I think that presented a unique composition that I probably would not have gotten at any other time. But shooting theses horses meant I had to work fast as I had another male to compete with. I took several shots but none captured the beauty or the spirit of the moment as the one I captured here. Yes, it was a frantic scene but for a few small seconds, things were calm and I was able to capture the two horses in a moment which I thought flattered them both. In my mind, I  captured them in what I believe is a very charismatic and yet a simple, elegant portrait

Sometimes, you don’t get what you set out for. Instead, life surprises you and you get something better, more intriguing, more distinct than you had experienced before. That is pretty much what happened in this trip to the finger lakes. Although I started out trying to capture a story about a single horse, a stallion. I ended up with a lovely, classical shot depicting a Tale of Two horses.