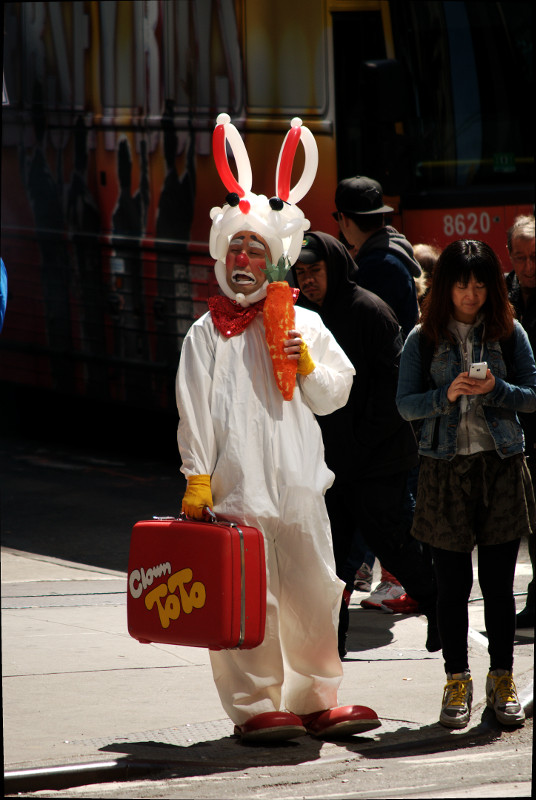 On the same day I visited New York City and caught sight of the Naked Cowgirl, I also took notice of another odd character in the Times Square area. It was part Easter Bunny,  part clown and part man. So confusing was this character that I had no definitive way to describe him or it. In fact, it wasn’t until I caught him with the most depressed expression I had ever seen on a street performer that I chose to dub him the weeping clown.

At first glance, I thought he was one of the usual street performers dressed up as an Easter Bunny. After all, he head two protrusions jotting out of his head like bunny ears, a completely white costume, and although it is not apparent in my photo, a fuzzy, white, fluffy tail. To top of the illusion of a 5′ 6″ rabbit, he walked around with a 12 inch carrot in his hand. So, this was a bunny rabbit, right?  Well it got a little more confusing.

The costume was accentuated with a bright orange brief case which read – Clown ToTo. It wasn’t clear what the contents of the brief case was but it was kind of odd to have an Easter Bunny walking around with a briefcase. Further, under closer scrutiny, I realized that the protrusions on his head were merely balloons being masqueraded as ears.  Also, another unique characteristic of his costume was his shoes. They were the type only seen on cartoon characters due to their enormous size.  Oh and less I forget, there was also facial paint which was used to decorate the face.  Ok, so we now have several elements which suggest this was indeed a clown.

All together, there is no singular term which correctly describes this character. I myself may be wrong in  the description I have settled on. Is he a clown, an Easter Bunny, a man? Whichever one of these correctly describe him, I have chosen to refer to him as the weeping clown.