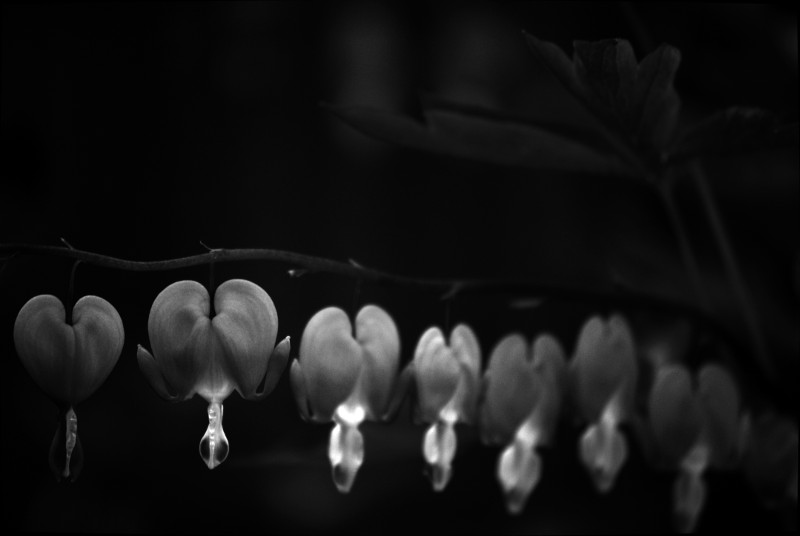 Memorial Day was established as a day of reflection for those who died in the U.S. Civil War. However, it has expanded to recognize the soldiers who have lost their lives in other confrontations that the U.S. has engaged in.  Of course, for every soldier lost there is a grieving family. And, I could thing of nothing else which quickly and symbolically communicates their loss than the Bleeding Hearts flower.

As depicted in this post, the Bleeding Hearts is a flower which has an uncanny shape like a heart. And, as it matures, the pointed end of the flower peels back to expose a white, pointy, bud-like shaped part of the flower which resembles a tear drop. Thus, we have the bleeding heart.

Normally, these flowers can range from red to pink in colour and may have variations in between. Contradicting its otherwise upbeat mood, I selectively chose to remove the colour to communicate otherwise. Instead, I chose to emphasize the sadness of Memorial Day in recognition of the fallen.

So, in a less festive and more spiritual recognition of Memorial Day, I have made two variations of the Bleeding Hearts available free for download as desktop wallpapers – Bleeding Hearts Black & White and Bleeding Hearts Colour.  If you wish to receive a signed and dated print feel free to contact me for details. I only plan to produce 25 prints of either variant – colour or black and white.